From Underdeveloped Lungs to a Mighty Roar 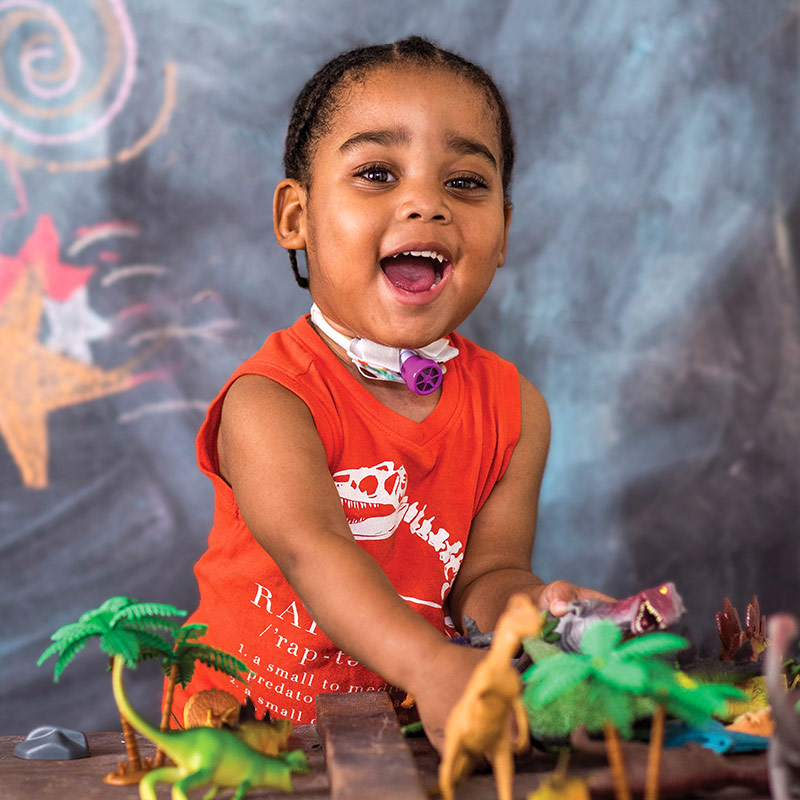 Kristin Spicer had a healthy pregnancy, but one day she began to experience pain she believed was gas. She took some over-the-counter medicine, but headed to her local emergency department when the pain continued.

Kristin was admitted to the hospital for pre-term labor, where she stayed for two days. After reviewing her condition, it was determined that Kristin would need to be transported to MemorialCare Miller Children’s & Women’s Hospital Long Beach.

Upon arrival, Kristin was taken to the Cherese Mari Laulhere BirthCare Center, where she was given treatment to help extend her pregnancy, giving her baby’s lungs more time to grow and a better chance at survival.

After two days, her water broke and she needed an emergency cesarean. At just 23 weeks and five days, Lei Mason Spicer was born weighing only 1.5 lbs., which is smaller than the average pineapple. Because Miller Children’s & Women’s specializes in care for moms and babies, Lei was taken just down the hall to the Level III Neonatal Intensive Care Unit (NICU).

Because of his early birth, Lei had a range of life-threatening health issues – the most serious was an atrial septal defect (congenital heart defect) and chronic lung disease as a result of his underdeveloped lungs.

In the NICU, he was given extra oxygen and was put on mechanical ventilation to assist his with breathing. Mechanical ventilation is essential to a preemie’s survival, but over time, the pressure from the ventilation and excess oxygen intake can injure a newborn's delicate lungs. Babies who are born very prematurely or who have respiratory problems shortly after birth are at risk for bronchopulmonary dysplasia, often referred to as chronic lung disease.

The Children’s Heart Institute at Miller Children’s & Women’s is one of only a few programs in Southern California to offer comprehensive congenital cardiac surgical care to patients of all ages, including preemie’s like Lei.

“For the first month of his life, we couldn’t hold him,” says Kristin. “We were only able to touch him and change his diaper. It was hard, but the entire team was there to support us.”

After heart surgery, Lei was given a tracheostomy, which is a surgically created hole in the windpipe that provides an air passage to help him breathe easier with ventilator support.

Because of his illnesses, Lei also struggled with feedings and gaining weight. A gastrostomy tube (G-tube) was inserted through his abdomen to deliver nutrition directly to his stomach.

With the tracheostomy and G-tube in place, Lei finally went home after six months in the NICU.

Living with tubes can be scary and challenging for families, so Kristin received education and support to prepare her for Lei’s health management at home.

Since leaving the NICU, Lei has received follow up care from his gastroenterologist, who makes sure Lei is feeding and growing normally, his cardiologist who monitors Lei’s heart, and his pulmonologist who follows his lung progress.

After a year, Lei was able to start feeding by mouth. Now at 2-years-old, he has one last hurdle to climb – the removal of this tracheostomy and G-tube.

Every three months, Lei receives a checkup from his team at the Children’s Pulmonary Institute, including x-rays and tests to see how well he can breathe on his own. His tracheostomy is set to come out any day – a sign that Lei has developed strong lungs.

When hearing Lei roar alongside his toy dinosaurs, it’s hard to imagine his lungs were ever underdeveloped.