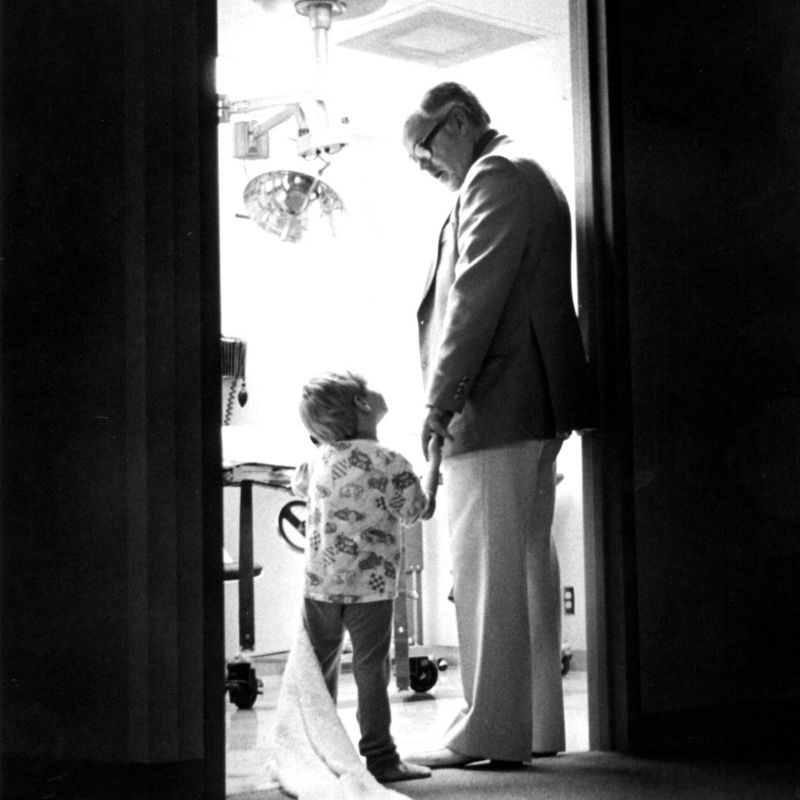 In the 1960’s, hospitals in the Long Beach area only had pediatric units that were primarily devoted to surgery. At that time, children under 13 in California were not allowed to go into a hospital and visit ill parents or siblings, nor were any family members allowed in the hospital’s nursery. The late Dr. Harry Orme, the city’s first pediatric cardiologist, learned about an innovative concept called “patient and family centered care” while traveling.

He fell in love with the idea — and as a physician himself — he knew that families, including siblings, were a key part to a patient’s recovery. He began to work toward the establishment of a children’s hospital in Long Beach that would embody the patient and family centered care philosophy and change the culture of pediatric health care.

To help fund the construction, Dr. Orme enlisted the support of a successful Long Beach contractor, Earl B. Miller and his wife, Loraine H. With a generous donation by the Miller family and the community, the development of the new children’s hospital began. The planning and construction went into the works and the city of Long Beach and its community members were in full support. Due to the overwhelming support of Long Beach’s philanthropic community, the hospital was completely paid for by the time it opened.

Miller Children’s & Women’s Hospital Long Beach opened in 1970, with many innovative patient and family centered care features, such as patient rooms to accommodate a parent’s overnight stay. We opened with 65 active pediatric physicians and surgeons along with services such as an expanded Neonatal Intensive Care Unit (NICU), cleft palate program, allergy, ear, nose and throat, endocrine, urology and general surgery.

In the 1980’s, an immunology department, pediatric psychiatry, pediatric genetics and pediatric GI services were added. During the 1990’s, the creation of “carelines” allowed different specialty groups to meet and work on best practices. The concept of “outpatient care” also was added at this time with the opening of an Outpatient Surgery Center and the Tichner Lowman Clinic. Important supportive care and specialty care elements were added such as a pediatric rehabilitation program, children’s protective services, pediatric dentistry and behavioral and developmental care, through the Stramski Children’s Developmental Center.

In 2003, women’s health care became part of Miller Children’s & Women's when it brought women’s services (maternity care) under its license. The Cherese Mari Laulhere BirthCare Center treats babies and women of all ages through its many services. Nearly 6,000 babies were born at the hospital in 2004, up 10 percent from 2003, as some of the area’s hospitals closed their maternity units because they were unprofitable. True to our patient and family centered care philosophy, we care for expectant moms, mothers in labor, newborn babies and children up to 21-years-of-age.

The BirthCare Center also houses a Perinatal Special Care Unit that takes care of expectant mothers with high-risk pregnancies; those women hospitalized prior to giving birth. If a baby needs to go to the NICU immediately after birth, they care taken just down the hall rather than needing to be transported to another hospital. Our 93-bed NICU cares for more than 1,400 babies a year, more than any other hospital in Los Angeles, Orange and San Diego counties.

As the years continued, major changes including sub-specialization of pediatrics and the increase in regionalization allowed us to draw patients from outside the local community — and become a regional destination for specialized pediatric care. We have grown in size, scope of services and medical and nursing strength.

In 2009, we opened the Miller Children’s & Women's Pavilion housing an expanded NICU, imaging and surgery centers, as well as an inpatient hematology/oncology unit. The Surgical Center includes seven operating rooms sized just for kids and designed to reduce stress and anxiety often associated with surgery for children and their parents. The NICU offers individual patient bays and private family areas. The hematology/oncology unit provides a dedicated playroom for kids with childhood cancer and blood disorders, which gives them a chance to bond with other children in a similar situation.

In order to meet the growing needs of the community, we opened an outpatient satellite center in Torrance in 2009. In 2010, another location opened in Fountain Valley.

In 2016, we finished a three-year expansion of our Cherese Mari Laulhere Pediatric Intensive Care Unit (PICU). The unit was renovated with the help of parent input, and features private patient rooms complete with a private bathroom and comfortable pull-out bed for a parent who chooses to stay the night with their child. The entire unit was built with evidence-based design to prevent infection, and each patient room has an adjacent nurse station with a window that allows nurses to check in on patients while working – keeping Dr. Orme’s vision in mind of patient and family centered care.

In 2016, we also opened the 36-bed Small Baby Center within our NICU – the largest in Los Angeles and Orange Counties. The Small Baby Center is designed to care for the tiniest premature infants, often weighing less than 2 lbs., in a serene environment that mimics their mother’s womb.

We're continuously growing to meet the health care needs of our community’s young patients. In 2021, we opened the brand-new Cherese Mari Laulhere Children's Village, which is the only building of its kind in Los Angeles and Orange Counties to offer a one-stop-shop approach to specialty care for kids. In one kid-friendly location, families have access to pediatric doctors in more than 30 specialties, as well as a range of health care services, such as a laboratory, pharmacy, imaging and rehabilitation gyms. Family support services including an Education Center and Family Resource Center also are available.

In the United States, there are less than 70 free-standing children’s hospitals that provide teaching, research and comprehensive pediatric care. We're recognized as one of the eight free-standing children’s hospitals in California and still incorporate patient and family centered care, spiritual healing and mind-body connection into our medical and surgical interventions, true to the vision of Dr. Orme when he embarked on building the hospital more than 50 years ago.