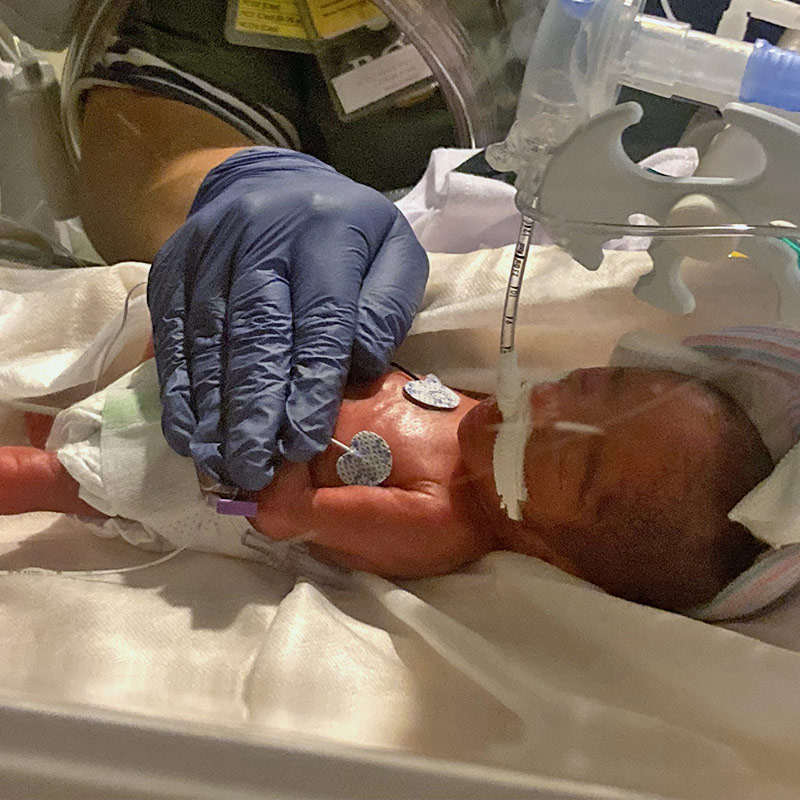 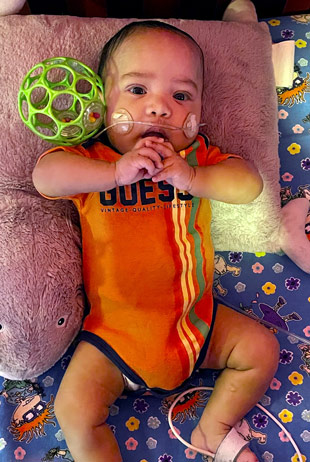 Juelz, after a 6-month stint in the neonatal intensive care unit (NICU) at MemorialCare Miller Children’s & Women’s Hospital Long Beach, has started his outpatient therapy journey at the Children’s Village after being discharged from the NICU at the end of January.

Juelz has overcome and achieved more than his parents could even imagine in his ripe-old-age of 6 months– he’s overcome more health issues than most middle-aged Americans with less than perfect health habits. But his parents, Jannine and Ronald, couldn’t be more proud of their young son, named after a musician. And just like many musicians, Juelz has been beating to his own drum, since he arrived on July 30, 2021 weighing just 1 pound, 7.5 ounces.

Jannine’s water broke four months early – sooner than she wanted or expected. She was rushed to a nearby area hospital, but she wasn’t able to get the high-level of care for such an early pregnancy. The medical team there knew that for a pre-term pregnancy this early, it was best for Jannine and her unborn baby’s health to be transported to Miller Children’s & Women’s.

Miller Children’s & Women’s has a specialized transport program that is available to pick up a patient in a moment’s notice and get them to the level IV BirthCare Center and NICU – where they are specialty trained to care for the most at-risk cases. The transport team jumps into action stabilizing the patient and ensuring that they can get mom and baby the quick care they need all while communicating with the team at the hospital.

“When they told me that I needed to be transported to Miller Children’s & Women’s, I wasn’t nervous,” says Jannine. “My mom and sister also had high-risk pregnancies and delivered there; and in fact, both my sister and I were cared for in the very same NICU where Juelz was cared for.”

Juelz came into the world just a little over one and a half pounds, and was only 12.6 inches, but his small size, certainly didn’t match the size of his spirit. It was important that Juelz was in the level IV NICU such as Miller Children’s & Women’s that also has the largest Small Baby Center in Los Angeles and Orange County and has an Extremely Low Birth Weight Program with experts trained to deal with babies weighing as little as 1 pound.

“We are uniquely situated to provide the highest-level of care (level IV for maternity and NICU), to both mom and baby,” says Antoine Soliman, M.D., medical director, NICU, Miller Children’s & Women’s. “Miller Children’s & Women’s has hospitalists, maternal fetal specialists and neonatologists on-site 24/7 to ensure mom and baby both get the high-level emergency care they need in these situations.”

At first Juelz struggled with breathing and gaining weight. Despite these difficulties, his mom and dad visited him every day and sang to him.  When the day came that Jannine got to hold him for the first time, “I was overcome with joy and overwhelmed with how tiny and little he was with so much medical equipment still needing to be attached,” says Jannine. “But there he was my baby boy.”

Then they learned he needed a procedure for his PDA – a common condition in premature infants where the connection between the aorta and pulmonary artery does not close – in hopes it would help his oxygen levels. The heart procedure was a success, but he still wasn’t quite ready to leave the unit. He did always have fun serenading his parents and nurses though when they would come to check on him.

Juelz seemed to be progressing and they thought they may get to take him home for Thanksgiving, but he stopped taking his bottle all the way due to severe acid reflux. They needed to give Juelz more time to learn to feed to sustain his body on his own.

By Christmas, they thought for sure he would go home, but he was still having a hard time eating a full bottle. The neonatologists prepared Jannine and Ronald for a potential second surgery to put in a feeding tube to help Juelz get the nutrition he needed. The team and family held off for a while, but they finally made the decision to undergo the surgery.

Juelz did get the G-Tube put in to help him with his feedings since he was also having a hard time latching on the nipple. Once they mastered the G-Tube they finally could go home. The NICU team worked with the family to prepare them for at home care for the G-Tube and all of baby Juelz needs. Six months later they finally did it, they made it home.

The family is still home and doing well and is scheduled for follow-up care at Miller Children’s & Women’s Cherese Marie Laulhere Children’s Village. It won’t be long before baby Juelz is serenading a new team of rehab therapists and nurses with his sweet sounds.