Kayla Learns She’s Capable of Anything, Even Beating Cancer

In February 2018, Kayla was 10-years-old and loved learning and going to school — it was one of her favorite parts of the day. It was the second half of the school year when Kayla started having trouble with severe pain in her leg and urinary incontinence — the involuntary leakage of urine. The symptoms continued for weeks with no solution, despite visits to her primary care physician and X-rays of her leg.

Then it happened — Kayla’s blood pressure spiked, and she had a seizure. She went to her local hospital. After an assessment, it was determined that Kayla required specialty pediatric care and was transferred to MemorialCare Miller Children’s & Women’s Hospital Long Beach.

Kayla was admitted to the Miller Children’s & Women’s Cherese Mari Laulhere Pediatric Intensive Care Unit (PICU). Her care team completed a comprehensive assessment of her health, it was strange because Kayla’s symptoms were so unique. It wasn’t until she recovered from her seizure that the care team learned about Kayla’s challenges with her leg pain and urinary incontinence. Imaging studies of her pelvis discovered a tumor. The team learned that the tumor was causing compression on Kayla’s urinary system.

Once the tumor was identified, Kayla was taken to the Jonathan Jaques Children’s Cancer Institute where a magnetic resonance imaging (MRI) test was completed and a biopsy of the tumor was performed. The tumor turned out to be a large cancerous mass.

She gently explained to Kayla that she had Ewing’s sarcoma, a rare type of cancer that occurs in bones or in the soft tissue around the bones. Ewing’s sarcoma typically occurs in children and young adults, often beginning in the legs, bones of the pelvis and arms.

Due to the nature of the cancer, Kayla would require intensive chemotherapy which meant she wouldn’t be able to go to school.

“Kayla was heartbroken,” says Marlene, Kayla’s mom. “The thought of missing out on school and her friends was the hardest news for her to accept. School means so much to her.”

Dr. Baumgartner reassured Kayla and her family that Miller Children’s & Women’s provided a Hospital School Program that helped ensure patients are able to continue their academic goals during hospitalization. And once discharged, Kayla also would get to complete homeschooling. Another important aspect of the multi-disciplinary care that Kayla would receive was that she would be part of the School Reintegration Program once she was ready.

“School is a place for learning and fun for kids. Children benefit from returning to school as soon as medically possible,” says Dr. Baumgartner. “Going back to school brings feelings for everyone — tack on a cancer diagnosis and the feelings multiply.”

The Jonathan Jaques Children’s Cancer Institute works one-on-one with patients and families to help ease school separation and the transition of school re-entry. 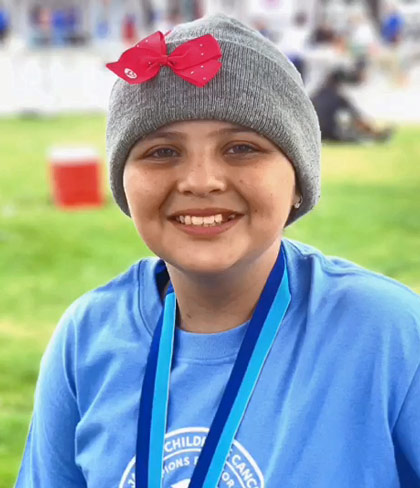 Once Kayla and her family understood what they were up against and met the comprehensive care team that would be by their side throughout their journey, things moved quickly. Kayla had an implanted port — a flexible tube that’s placed into the vein — installed into her chest to administer medication.

Kayla received chemotherapy for six weeks in the hospital. Then, she was released to complete her treatment from home. She continued outpatient treatment and in total was treated for a year and a half.

Kayla completed her treatment in April 2019, but continues to be monitored by her care team every two months.

Kayla was able to return to complete the last three months of the school year with her class who had been major supporters of Kayla through her journey, rooting her on from the classroom.

At the end of the year, she was still able to make it into the school yearbook and was even able to promote with her class — an incredible way for Kayla to celebrate her triumph over cancer.

“Despite all the odds and challenges, Kayla not only beat cancer, but she accomplished her goal,” says Marlene. “I’m proud of her and thankful to her care team helped make her dream come true.”